This workshop is a continuation of a series of workshops organized by tamil bloggers in various parts of tamilnadu recently.

I took a session on using ekalappai - tamil typing software for windows.

You can the pictures taken in the workshop:
http://tamilveli-news.blogspot.com/

This shows that tamil bloggers are growing in numbers and getting organized.
In this bloggers meet, some of us decided to take tamil computing workshops to next step. Thus "Project Tamil Ready" was born. More details about project tamil ready is in chella's blog.

My assumption is, there are roughly 3000 tamil blogs which is the highest in any Indian language. Even in hindi there are roughly only about 1000 blogs (if anybody else have a disputing figure please feel free to comment).
Posted by Mugunth/முகுந்த் at 12:31 AM 3 comments:

I have lived in Malaysia for about 4 years and have known the problems faced by the tamil community.

I watched with heavy heart some of the videos in the net. The way the peaceful protest were handled by Malaysian authorities is very bad. The world leaders should condemn this.

Posted by Mugunth/முகுந்த் at 10:58 PM 2 comments:

How to increase the VMWare (preallocated) disk space.

I have started using ubuntu 7.04 (Feisty Fawn) recently. But for some of our office work, I needed older version of ubuntu(6.06). And for that I used VMWare.

Initially I allocated 6GB space to ubuntu 6.06 virtual machine, which I found that is not sufficient for my work. So decided to increase it to 10GB. And after some search in google found a way to increase VMWare disks spaces. Following blog entry is to record the steps which I followed and it might be useful for others also.

It gave the following errors:
Using log file /tmp/vmware-msubramanian/vdiskmanager.log
This disk is part of a snapshot chain in '/var/lib/vmware/Virtual Machines/Ubuntu6.04/Ubuntu6.04.vmx'.
The selected operation can only be executed on a disk with no snapshots.

I found I have snapshots of ubuntu6.06 vmware disk.

Used the following method to remove the snapshots:
In the VMWare menu, used the Remove Snapshot option,
VM --> Remove Snapshot .. ( This is done while the Virtual machine is switched off)

WARNING: If the virtual disk is partitioned, you must use a third-party
utility in the virtual machine to expand the size of the
partitions. For more information, see:
http://www.vmware.com/support/kb/enduser/std_adp.php?p_faqid=1647
$
Posted by Mugunth/முகுந்த் at 3:05 PM 7 comments:

Oflate the number of bloggers who write in tamil language have grown considerably. I assume there could be more than 1000 active tamil blogs currently.
tamilblogs.com aggregator(which I maintain) aggregates content from about 650 tamilblogs.

Recently tamil bloggers held a get together in chennai. And it was covered by popular tamil TV channel Makkal TV. This TV show can be seen in YouTube here. This sort of media coverage for a bloggers get together is a good sign. This will help to get attention of the public towards blogging. And this will lead to increase in the number of tamil bloggers.

I would love to see a strong & responsible tamil blogging community which will act as an alternate media.
Posted by Mugunth/முகுந்த் at 1:52 AM 11 comments:

Later I added mysql database support to tamilblogs using code from another similar opensource project lylina. Some of my tamil blogger friends have requested me for the complete sourcecode of the software used in tamilblogs. After few more such requests I thought opensourcing this tamilblogs software would be helpful to many.

Right now one of blogger masivakumar has joined me in this project. I hope many more will join and enhance this project.
Posted by Mugunth/முகுந்த் at 12:35 AM 6 comments:

Recently thro one of my friend I got to know about this website: http://www.s-anand.net/tamil
Its a wonderful service. Using this we can search for a particular song and start hearing it. The search can be made based on the song name or movie name.

For example, I am great fan of late MGR's songs. When I typed MGR in the search bar, it brought me some of the MGR's songs as below. 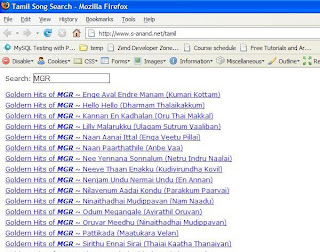 There are thousands of tamil songs around, its really very useful software.

I wonder why no tamil techie has thought about this earlier (including me :) ) !

Great work! Thanks a lot Anand for creating this.
Posted by Mugunth/முகுந்த் at 11:38 AM 47 comments: